The Three Varieties Of Cannabis Plant

As we discussed in the article The Diversity Of Cannabis Plants, Cannabis developed into three distinctly different varieties as it adapted to nature, it’s climate and current surroundings. Sativa Cannabis grew tall, with thin, widely spaced branches that produced long rows of buds and flowering tips known as colas. Indica Cannabis plants had to adapt to fair harsher conditions as they spread across India, Afghanistan and Asia and so they reduced their height, making them less susceptible to breaking in the strong winds, and took on a bushy shape with small, dense buds that were faster flowering and quicker to mature to cope with the shorter Summertime and colder, darker Autumn months. Ruderalis became wild and fiberous, with few flowers and lacked any buds. It did however gain one significant trait. As it developed across Europe and Russia it gained the ability to flower under any light regime. This made it unique, as both Sativa and Indica Cannabis plants require approximately twelve hours of uninterrupted darkness in order to activate the chemical changes needed in the plant for it to begin flowering.

So which is the best form, how do you tell them apart, what are Cannabis hybrids?

All of these questions quickly spring to mind when people first realise there is more than one type of Cannabis and each has entirely different characteristics and effects. Whether Sativa is better than Indica or visa-versa depends upon taste, culture and what you wish to do with it. A high quality Sativa Cannabis seed can produce a plant that can exceed three meters tall and is capable of producing pounds, if not kilos of dried buds. Give that same grower an Indica seed that may only require fifty days to flower and mature, but whose final harvest height will be around a meter tall with a yield of several oz, and ask them which is the better Cannabis type to grow.

Alternatively, an indoor grower, or European outdoor gardener may not wish to grow such tall, expansive plants, requiring them to remain more bush-like with a faster flowering period. By increasing the vegetative period, and utilizing Super-Cropping techniques, Indica growers have overcome the problem of lower yields, while enjoying the far quicker flowering and maturing times that growing these plants bring.

Until the early part of the 1990’s there was very little use for the Ruderalis Cannabis variety. It’s popularity as a fibre and rope making material was marred due to it’s inclusion in the drugs act prohibiting its planting, and recreational users who were prepared to grow their own supply’s could see little use for the variety. All that changed however, when it’s auto-flowering properties were utilized. Suddenly these self-flowering genetics could be combined with Indica and Sativa varieties to produce new, autoflowering varieties, which over the coming twenty years would become more and more popular with both indoor and outdoor growers all around the world.

These advancements in genetics and the combining of strains of Indica and Sativa Cannabis with Ruderalis genes came about due to the genetic work undertaken in Holland from the start of the 1980’s. The aim of a group of Cannabis friends, growers, respected academics and businessmen formed groups to combine the best traits and characteristics from one strain, together with the best points of another. To take the euphoric high and explosive yield of the Sativa and combine it with the resin production, density and speed of the Indica. The hybrid was born. From then on countless crosses were undertaken using the genes collected from plants all around the world. Today there are thousand of strains, both registered and available in seed form, as well as being underground and only available in clone form. 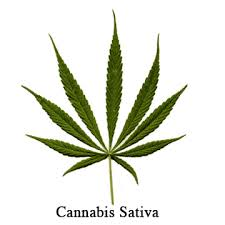 In it’s true, Land-Race form, Sativa Cannabis plants grow tall, often between 1.5-5 meters. Naturally found around the equator where they enjoy a balanced twelve hours of light and darkness virtually all year round. They produce long fingered, slender leaves that can be a variety of shades of green and produce long running buds with quite a high percentage of sweet-leaf.

True Sativa Cannabis plants have lengthy flowering periods, with some requiring up to six months to completely grow, flower and mature. Because of these longer flowering times, yields are huge, often the plants become tree’s and produce vast amounts of buds. This is due to the prolonged growth period Sativa plants enjoy. With an almost endless climate of twelve hours of darkness and similar hours of sunlight, Sativa plants begin to flower when they are still quite small, but continue to grow and develop for many weeks after flowering has commenced.

Sativa Cannabis is well known for it’s higher levels of THC, one of the main psycho-active ingredients found in Cannabis. These higher THC levels produce a euphoric, happy feeling and have been used to assist depression, stress and other mental health issues. 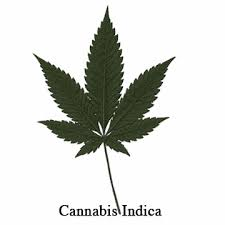 Pure Indica plants remain short and squat, stretching very little as they begin flowering. There bush-like structure often grows as round as it does high, reaching between 1 – 2 meters tall when fully mature. It’s shape developed as it was better suited to the strong winds and harsher conditions of the Afghan mountains where it grew originally, and due to the more abrupt changing of the seasons, adapted a shorter flowering period with shorter, broad leaves to capture as much sunlight as possible.

Flowering times usually average around eight to nine weeks to reach peak maturity, although there are some Indica strains that can flower to maturity in as little as forty-two days. Although their grow is severely restricted once flowering commences.

Indica Cannabis is famous for it’s dense, fat, resin covered buds, and although the THC levels in Indica plants are often lower, the extra resin they produce to capture male pollen floating on the wind makes them an ideal strain for hash making, something the area is well-known for throughout history.

Although Indica Cannabis plants contain lower levels of THC, they usually contain higher levels of the other psycho-active ingredient found in Cannabis, CBD. The combination of these higher levels interacting with THC produce a different kind of feeling, often referred to as a body-buzz or stoned feeling. These varieties are often used as natural pain-killers as they have a more relaxing affect on the body. 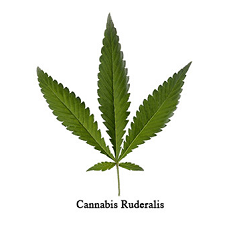 Ruderalis grew as a wild form of Cannabis across Europe, Russia and parts of China. Its small, slight structure, high leaf ratio and lack of real buds made it worthless as a commercially viable strain of Cannabis. To take account of the very short Summer months and lower levels and hours of sunlight, Cannabis Ruderalis developed a very short flowering time, and could often induce itself to flower even when exposed to almost constant light.

Because the plants are very weak, spindle like and lack any real budding sites they have low levels of both THC and CBD making them unwanted by Cannabis growers. Seed breeders and strain creators did find a use for the genetic material however, and incorporated the Ruderalis genetics into modern-day hybrids to create a new variety of Autoflowering seeds.

There are now many autoflowering strains available, containing higher levels of THC and CBD courtesy of their Sativa and Indica genetic addition, and they are becoming increasingly popular with indoor and outdoor growers for their ease and speed of growth.

← A Brief History Of Cannabis
Are All Cannabis Seeds The Same? →