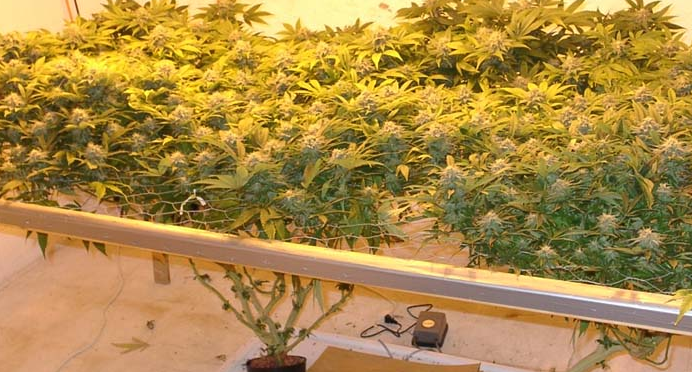 Achieving the heaviest yields from your plants, requires the creation of many large, dense buds that fill the entire area, this is commonly referred to as the canopy. The more even spread and dense the canopy, the greater the overall yield.

Many beginner and novice Cannabis growers start by germinating the seeds potting them, and allowing the plants to grow and develop as nature intended. To watch a plant grow, flower and mature, producing Cannabis yourself, is truly a wonderful experience, and caring for them can be relaxing and very therapeutic. However, many growers quickly become unsatisfied with their final harvests, and although the quality is almost always very good, the overall yields are often less than many expect, or feel they have been led to believe the plants are capable of producing, per square metre.

To address this issue we need to summarize what is meant by the description ‘yield per square metre’, how it can be achieved, the correct strains to use and where. 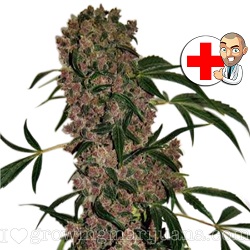 Firstly, lets define the perfect harvest for a one metre square grow tent, cupboard or area. Novices may opt for a small number of large, tall plants that have grown as they wish, producing nice long, big fat buds sat in the center of the plant with plenty of room around it, where the lateral branches have developed, creating several budding sites and a large swollen end bud. However, the ‘cash-cropper’ or commercial grower cannot let all that light and space go to waste, and knows that the best harvests are achieved with the formation of a canopy that produces multiple budding sites, creating a ‘hedge’ of buds, with a far greater yield than can be achieved any other way with few seeds.

Overall yields of 400 grams per square metre can only be produced with a good, solid canopy of buds, each receiving the maximum amount of available light and fresh, CO2 rich air. Until you understand and adopt these techniques, the maximum potential yield from your seeds can never be achieved.

Many of the Cannabis seeds we promote produce their best yields when grown using this Screen-of-Green (SCROG) methods, while smaller, more compact plants are better suited to the Sea-of-Green (SOG) method. Read more about Sea-of-Green technique here.

One of the major advantages of the Screen-of-Green (SCROG) method is that it requires fewer plants to fill an area. Unlike Sea-of-Green, where plants are grown close together, this method encourages the plants to produce strong branches and spread out horizontally as much as possible.

Setting Up A Screen Of Green 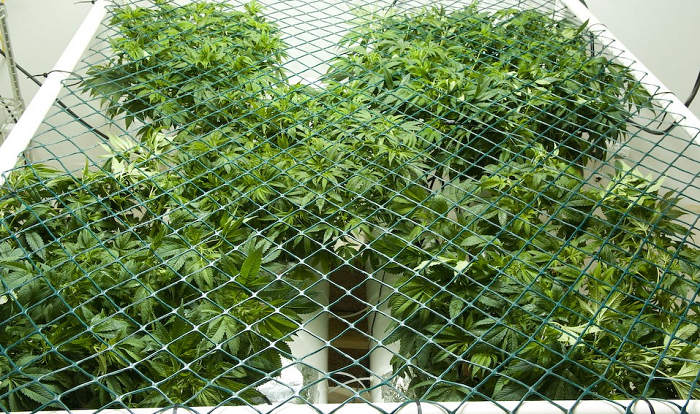 Once the young seedlings have established a reasonable rooting system, they will need to be potted into either a hydroponic unit, or a large pot of growing medium, big enough to allow the roots room to grow throughout their entire cycle.

At this point there is no need to secure the screen in place, the priority now is to develop the best, strongest lateral branching structure possible and a healthy rooting system. As the plants begin to develop, a selection of techniques can be utilised to help generate the growing traits we desire.

TOPPING – Removing the very top shoot of the plant causes the remaining branches to develop stronger and more rapidly than they would with the main stem in place. This can be performed several times during the vegetative stages, allowing the plant to produce a bushy canopy.

SUPER CROPPING – Often used to describe the complete range of techniques, super-cropping is actually a method of its own. It involves gently crushing the soft tissue inside the main stem and stronger branches and bending it. This damage is subsequently repaired by the plant, thickening the affected area and allowing more nutrients to pass through.

BENDING – One of the most commonly used methods and when performed correctly can produce a very strong branching structure. Similar to super-cropping it works by increasing the flow of nutrients through the branch. By bending and applying pressure to the branches from a young age, they will thicken around the knuckle joint, the more severe the force the bigger the knuckle becomes. Even if they almost snap off, with a little first aid bandage and splint, you will find the repaired area produces a far stronger branch with a greater yield, than standard, unbent branches that haven’t been subjected to any levels of stress.

STAKING – This is an extreme form of bending, where pressure is applied to actively pull the branches and main stem down, forcing the plant to grow horizontally, rather than vertically towards the light. It swells the knuckles where the branches meet the main stem, increasing the flow of nutrients down the branch. When used in conjunction with topping, it produces a plant with multiple strong branches that will create many budding sites along their length.

PRUNING – This involves removing the lower parts of the plant to improve the growth in more productive areas. Shoots and weak branches that do not make it to the canopy will not produce the buds or flowering sites needed to fill the area. By removing these weak parts, the plant will focus its resources on the most productive areas, producing more sites and bigger buds. 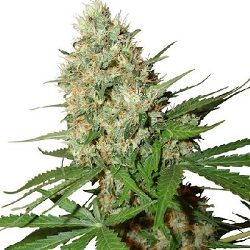 During the next few weeks the aim is to promote the strong growth of as many branches as possible, and keep all the growing tips at an even height. Once the desired level is achieved, it’s time to place the screen into position. A simple framework made with chicken wire will suffice, secure it into place and spread the plants and branches out as evenly as possible. Remove all lower, weak branches and shoots (Pruning) as the canopy will be formed over the screen, so they won’t receive any light once it’s completed anyway.

Once the plants are in position and achieved the desired height, with a good even spread of branches under the secured screen, it’s time to turn the plants to a 12/12 photo-period and begin flowering. Until now, the choice of strain makes very little difference, however, for the Screen-of-Green method to reach its full potential, the plants should contain a heavy Sativa influence, causing a stretch during the first few weeks of pre-flower.

During these first few weeks of flowering recommended SCROG plants can grow rapidly, producing ‘running’ shoots along the branches, which, if the plant was left to grow naturally, would form the long, ‘foxtail’ colas that Sativa’s create. The aim of the Screen-of-Green method is not to create several large colas, but to have multiple buds being formed that cover the entire area. To do this the branches need to be secured to the screen, forcing them to grow along it, many growers physically weave the branch in and out of the gaps, sending each branch in a different direction. The subsequent shoots that are produced, will grow vertically, with each receiving an even amount of light, air and nutrients to flower and bud to its maximum potential.

Growing Cannabis indoors using this method is highly productive and profitable. A canopy of almost any size can be created with enough care and plant training, and the number of plants can be as many or as few as you decide to grow, check out the picture at the top of the page and below, great examples of two Cannabis plants grown using the Screen-of-Green method.

Performed correctly, Screen-of-Green will easily achieve the stated yields for each strain, often providing as much Cannabis as the Sea-of-Green (SOG) technique, but with far fewer seeds. Many beginners may believe that bigger plants produce bigger yields, but that is simply not the case, bigger canopy’s produce bigger yields, and unlike the SOG method, which primarily focuses on producing a large central cola, SCROG grown plants produce multiple, medium-sized buds that far outweigh one large one, have greater bag appeal, and are less prone to mould issues as maturity approaches.

There are a couple of drawbacks with this method. The first is time. Screen-of-Green growing requires a longer vegetative period than Sea-of-Green growing. The principle of growing the plant to a minimum height, while forcing the branches to develop at a similar pace requires extra vegetative time, compared to growing a straight plant, whose tip will reach the minimum height far quicker if the branches are minimal and weak. Training the branches to develop along, and under the Screen will not only require time for the plant to achieve, it will require time, care and effort from you to train and secure them in the direction you require. In general, SCROG plants are Sativa dominant, to achieve the stretch needed to form the canopy once flowering is induced. 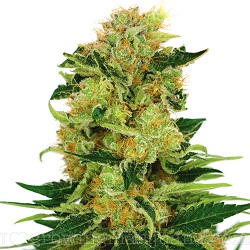 Sativa based Cannabis plants, in general, require longer flowering periods than Indica based Sea-of-Green recommendations, once again, requiring more time. Lastly, harvesting. Unlike small compact ‘cola-on-a-stick’ Sea-of-Green plants, these are a mass of medium sized buds that have grown between the gaps of the screen you constructed. Each bud will need to be chopped off the stem, untangled, manicured and left to dry at the same time. A long, time consuming process that makes bored seem interesting, and unless you have a pack of latex gloves handy, forget ‘skinning-up’ your fingers are so sticky they are glued together! But once done, the harvest is amazing and when dry, a ‘cash-croppers dream!!

The second disadvantage with this method is the necessary skill level needed by the grower. This is not a method for beginners. Although many beginner strains are great for SCROG, a grower really needs at least a small amount of knowledge, skill and understanding to produce a successful crop this way. Certain seeds may forgive mistakes such as incorrect nutrient or Ph levels, but flushing the roots correctly without removing them from the growing area can be tricky, especially in a tent-grow which may have pots at the rear and restricted access. Any mistake can appear amplified as many buds are produced from a single stem, therefore an error in watering or using an incorrect feed can have devastating consequences on a large section of the crop.

Although less of a problem now than a decade ago, all the plants must be guaranteed females that are used in the SCROG method. Intertwining a male, or hermaphrodite plant without realizing it during the vegetative stages would have devastating affects, pollinating the females, sending them into seed, rather than bud production. This can be avoided by purchasing only feminised Cannabis seeds.

Personally i prefer the Sea-of-Green method. Although it requires more seeds, the pots can be moved throughout flowering, are easier to flush should you make a mistake, and are faster to mature and harvest. But if you are looking for the best return per plant, or want to minimise your risk to a single plant, then the Screen-of-Green method is an ideal method, whether hydroponic or soil based.